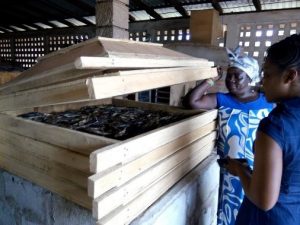 ISEES has won a grant from the Canadian Fund for Local Initiatives small grants scheme towards the project” Improving the health and livelihoods of women fish smokers in the Bomigo Community through Climate Smart Efficient Stove Technologies”. The project will span from October 2017 – February 2018.

The goal of the proposed project is to use technology, in the form of more efficient and less polluting climate smart cookstoves to improve the health of 100 women fish-smokers and their children in the Bomigo community, and improve their livelihoods by reducing their expenditure on fuel.

By implementing an awareness and education programme we also want to make these communities understand the harmful effects of current fish-smoking practices on their health, climate and the environment, and demonstrate alternative methods.

The project also seeks to install 20 improved ‘Ahotor’ fish smoking stoves within the community, by installing 10 demonstration stoves for educational purposes and 10 demand driven ahotor fish smoking stoves through a 70% subsidy, thereby creating an enabling environment for a thriving local market for improved fish smoking stoves by women groups. The Ahotor fish smoking stove is proven to have fuel 32% efficiency over the existing chorkor smoker, and reduces the levels of Polycyclic Aromatic Hydrocarbons (PAH) on smoked fish to zero, thereby making smoked fish more wholesome to eat – improving the health of community members. The stove technology also reduces smoke emissions to zero due to improved combustion, helping women to smoke fish in a healthier environment which also improves their health.

The project will also train 5 young artisans from the Bomigo Youth Development Association to be able to construct improved fish smoking stoves for women groups, thereby creating employment for them.

The project will in addition institute an end-user financing scheme in line with the Village Savings and Loans Scheme (VSLA) Model to encourage women groups to save to procure improved fish smoking stoves after the project period to ensure sustainable demand and supply of improved Ahotor fish smoking stoves within the Bomigo and surrounding communities.

The project will strengthen the capacity of the Bomigo Youth Development Association and Women Groups through leadership skills training to enhance improved governance and advocacy in the community.

The project will also help establish ISEES presence in the community to work with the Bomigo Fish Smoking Women Group and the Bomigo Youth Development Association to introduce other climate smart renewable energy solutions to the community and also develop further interventions to restore the mangroves through sustainable woodlot systems.

The community will be educated on the effects of high levels of mangrove harvesting as fuelwood and to be able to come up with actions to help replant the mangroves and be provided with alternative tree species to plant as woodlot for the community.

Rationale for the Project

The Bomigo community is an island comprised of around 1500 inhabitants in the coastal areas close to Anloga in the Keta district of the Volta Region of Ghana. It is a post surrounded by the salty waters of the Keta Lagoon, around 146 kilometers from Ho, with a final journey by boat the only way to reach the island from the mainland. Bomigo is off the electricity grid, with minimal access to public services – it is one of the poorest and most deprived areas of Ghana. The main occupations are into fishing and subsistence farming, and a large proportion of the economy in this area is generated by the process of fish-smoking, and fish frying primarily done by women, and often with children in the near vicinity. The men also harvest the mangroves and sell as firewood for fish smoking in the local communities thereby depleting the mangrove ecosystem.

It is on record that the use of traditional cookstoves, open fires and solid fuels (fuelwood/mangroves and charcoal) is the primary means of cooking for nearly 3 billion people in the developing world, and about 84% of households in Ghana. The over-dependence on forest for fuelwood contributes to deforestation, climate change and poor air quality with associated poor health implications. According to the World Health Organisation, cooking on open fires contributes to 17,000 premature deaths, including 3000 deaths of children are caused by air pollution in Ghana each year, 13% of the countries disease burden – (World Health Organisation, 2016). In addition to this, the inefficient nature of traditional cookstoves mean that a high level of fuel is required, meaning that the local ecosystem has been damaged due to the deforestation of red mangroves. Tackling deforestation is an important issue for Ghana’s future because there has been a 70% reduction in its forest cover in the last 40 years, partially caused by overharvesting for cooking fuels. In the case of the coastal areas, mangrove ecosystems are being depleted as fuel for fish-smoking.

We believe that by providing efficient cookstoves within the region, whilst providing an awareness and education programme alongside, we can make a huge difference to the lives of local women – improving their health, improving their livelihoods by reducing the amount of fuel they have to purchase, and improving their surrounding environment.

ISEES looks for further partnership to scale up this project by