The main idea of the DiBiCoo project is to trigger market uptake of biogas and biomethane projects through the initialisation of demo cases for the application of biogas/biomethane technologies in developing and emerging countries providing high biogas potential. This will be supported by interconected digital and non-digital support tools and decided stakeholder involvement. In the DiBiCoo project, the main focus is on biogas and biomethane value chains which are based on anaerobic digestion (AD) technologies.
.

The overall objective of the project is to facilitate knowledge development, technoogy transfer, capacity building and market development between the European biogas and biomethane industry and developing and emerging countries including Ghana. This is achieved through the development of digital and non-digital support tools, and actions, knowledge transer, and capacity building  as well as technical and business development support for biogas entrepreneurs up to the investment stage.

The project will increase the share of renewable energies both in Europe and in developing countries such as Ghana with special focus on large scale biogas technologies and biomass gasiication techonologies for industries, companies, institutions and municipalities.

The project will work with stakeholders in the biogas industry including policy makers, regulators, private sector actors, institutions, municipalities, financial institutions and industries to enhance knowledge exchange, and achieve the objectives of the project outlined above.

The project is being implemented by 13 consortium partners in 9 countries led by GIZ GmbH in Germany, globally and ISEES in Ghana

Overview of what we do

In Ghana, the DiBiCoo project is being implemented by the Institute for Sustainable Energy and Environmental Solutions headoffice at Madina Estates, Accra. The project is being Managed in Ghana by Project Manager Dr. Mutala Mohammed and Lovans Owusu-Takyi who lead a dynamic team of experts in project implementation.

A series of Capacity Building Workshops has been organized to build capacity of global biogas and biomass gasification practitioners. To learn more about the webinar Series please click here

The Dibicoo Project has produced a number of Knowledge Based Results and Deliverables that provide insights of experiences gained from the Project. To read more about it please visit here:
Project Results – DiBiCoo

The Project is being coordinated by GIZ GmbH including 13 institutional partners in 9 countries
Please visit here to read more about our partners and Project Implementation Team here:
Consortium – DiBiCoo

Are you a biogas or bioenergy company seeking to scale your business, redesign your business model to increase your market share, gain access to financing and connect to International partners who could support your business to scale?

The project is under the Auspices of European Commission #Horizon2020 coordinated by Deutsche Gesellschaft für Internationale Zusammenarbeit (GIZ) GmbH with 13 consortium partners including Institute for Sustainable Energy and Environmental Solutions – Isees Isees Ghana.

The training is facilitated by Experts from Europe with co-trainers and participants from #Ghana, #South_Africa and #Ethiopia

To register kindly fill this form https://bit.ly/DibicooForm3 by 5th March 2022. For any clarifications contact [email protected]

The workshop is aimed at providing skills and experiences on the developing climate finance schemes for biogas and bioenergy projects as well as  financial viability (profitability)  of biogas systems in Europe and Africa.

It will be held on the following dates and venue.

The Association of Ghana Industries have held its 3 day annual Industrial Summit and Exhibition at the Accra International Conference Center in Accra.

The Summit provided opportunity for industries and companies to interact and share ideas especially on the onset of the African Contintental Free Trade Area issues.

ISEES and the Digital Global Biogas Cooperation Project was there to interact with industry actors on the adoption of biogas and biomass gasification technologies and how to promote sustainability. 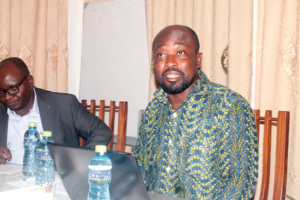 The second Digital Global Biogas Cooperation (DiBiCoo)- Ghana stakeholders’ consultative workshop has ended in Accra with an assurance by the Ministry of Energy of developing a regulatory framework for the biogas industry in Ghana.

The workshop was organised by the Institute of Sustainable Energy and Environmental Solution (ISEES), a non-profit research and training institution in Ghana, to provide local stakeholders with the opportunity to work together and get involved in the DiBiCoo programme.

The DiBiCoo is European Union Horizon 2020 Project, which seeks to create a sustainable market for biogas/biomethane between Ghana, Europe, Indonesia, South Africa and 13 consultative partners in nine countries being coordinated by GIZ.

Mr Seth Mahu, the Director of Renewable Energy of the Ministry of Energy, who gave the assurance in an address, said the time had come for biogas to be brought into proper focus in Ghana because of the enormous opportunity for the country.

“My search at the Energy Commission indicates that the Commission has already taken measures to draft the first biogas regulatory framework and after this event, we are going to escalate it and get the Minister to communicate to the Executive Secretary to expedite action in developing and completing the framework for the industry.

“I want to give you the Minister’s assurance that we are going to work with the Energy Commission to ensure that the regulatory framework for biogas is developed as quickly as possible,” he said.

Mr Mahu said when that was done it would assist to turn waste into useful products such as biogas for electricity generation for heat and other applications while helping to address the major sanitation issues that confront the country.

He said it would also go a long way to bring in the needed investment, both local and foreign, to be able to accelerate and sustain the development of the economy.

“We have been able to develop Bio-Energy National Action Plan and the draft-final is currently on the Minister’s desk. Shortly we would be inviting some of you here, if not all, to join us to do the final review of that document to ensure that it meets the expectation of the industry,” he said.

Mr Mahu said: “We believe that can be a precursor to provide the necessary information, the necessary data, as well as what we will be getting from the private sector to help us come out with a regulatory framework that would be organic; that is going to address the needs of the industry.”

Mr Prosper Ahmed Amuquandoh, the Inspector in-charge of Renewable Energy at the Energy Commission, urged practitioners in the biogas industry to be self-regulatory by weeding out quacks among them.

He said: “In every jurisdiction where the market thrives, you would realize that statutory regulation has very little role to play because the industry is self-regulatory. So you guys have to open your eyes and rout out the bad ones among you because if you have quacks; he or she would contribute to the negative experiences and negative practices either for the market or the technology,” he said.

Mr Amuquandoh said concerning the Renewable Energy Act, it was sent back to Parliament for amendment, which had already been done to allow Bui Power to get to the forefront of Renewable Energy activities and to address issues with tariffs and competitive bidding.

“One of our key areas is to create a sustainable market and to enhance access to renewable energy for both grassroots and businesses, and this DiBiCoo Project sets itself very well with us. We want to make sure that technology transfer between Europe and Africa is increased and knowledge is spread to understand the technologies that are in Europe and be able to adopt them,” he said.

Mr Owusu-Takyi said: “We hoping that district assemblies, companies that are working in fruit juice, those who are into animal husbandry and others would be able to understand the concept of biogas technologies and be able to raise the profile of biogas in Ghana.”

KICK OFF MEETING HELD IN BELGIUM 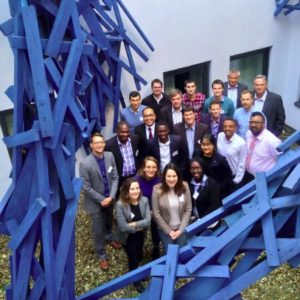 As part of the EU’s Horizon 2020 Societal Challenge ‘Secure, clean and efficient energy’, under the call ‘Market Uptake Support’; the Digital Global Biogas Cooperation (DiBiCoo) project held its kick-off meeting in Brussels, on October 30 & 31, 2019; in the presence of representatives from 13 participating organizations across four continents.

The overall objective of the project is to support the European biogas/biomethane industry by preparing markets for the export of sustainable biogas/biomethane technologies from Europe to developing and emerging countries. The project will help mitigate GHG emissions and increase the share of global renewable energy generation. The project also contributes to the UN Sustainable Development Goals (SDG 7) for ‘Affordable and clean energy”, among others.

As part of the deliverables, DiBiCoo will identify five demo cases up to investment stages in each of the 5 importing countries. Facilitated through a digital match-making platform and classical capacity development mechanisms for improved networking, information sharing, and technical/financial competences.

During the kick-off meeting, representatives of the consortia presented their respective work packages and discussed implementation plans with the project officer of the EU, as well as the expected deliverables for the 33 months project timeline.

The project with a budget of 3 Million Euros is implemented by the consortia and coordinated by the Deutsche Gesellschaft für Internationale Zusammenarbeit (GIZ) GmbH. EUs Innovation and Networks Executive Agency (INEA) oversees the project on behalf of the European Commission

CALL FOR SHORT TERM INDIVIDUAL CONSULTANT
BUSINESS DESIGN TRAINER
The Institute for Sustainable Energy and Environmental Solutions (ISEES) www.iseesghana.org under the auspices of the Digital Global Biogas Cooperation (DiBiCoo) Project ( www.iseesghana.org/dibicoo ) with funding from the European Union Horizon2020 request the services of an individual business design training consultant to join a consortium of international trainers in providing localized business design training for Biogas and Bioenergy practitioners in Ghana from February 2022 to May 2022
Application Procedure
Interested applicants may write to [email protected] to request for detailed


Terms of Reference and should submit technical and financial proposals to the above email not later than *31st January, 2022*
Qualifications
Interested trainers should have at least a minimum of BSc Degree (preferably Masters) in a relevant field with about 5 – 10 years experience providing business development training services.

The workshop was organized as a hybrid style with participants from the Ministries of Energy, Energy Commission, Ministry of Finance, Private Enterprise Financing Network (PFAN) among others.

The workshop provided opportunity to update Ghana stakeholders on the status of theproject, and also build members capacity on various initiatives being undertaken by the project globally

Please click on this online application form and complete the information therein. https://docs.google.com/forms/d/e/1FAIpQLSc2HtqxKIrCcAPA9y-HzsoGgW281RDteLI2TillF04Vu825fg/viewform

Selected Demo projects will receive technical assistance to develop bankable proposals up to the investment stage. About 5 projects will be selected under the Dibicoo Project and supported through capacity building and technical support from the European Union Consortium of Experts under the Dibicoo Project to get all documentation ready for investment.

A Zoom/Skype clarification Call on Friday 24th April 2020 at 10:00am prompt for those who would need further clarifications in completing the forms. Kindly register and share your skype ID with [email protected] to be invited to the meeting.

Countries where Dibico Project is Implemented

Call us 24/7. We are there for your support
Postal Address:
University Box LG 658,
University of Ghana, Legon, Accra

Where to find us